Google's new no logo was one of the most tweeted topics as it was unveiled. In the 24 hours after it was launched, there were 10,440 tweets regarding the logo. Almost a quarter of these were positive, a further 11 per cent were negative, as the Drum tells us. new logos and rebrands get exposed to a huge amount of public scrutiny nowadays. The world of social media we now live in means high-profile logo reveals start trending immediately, receiving praise and criticism in almost equal measure. But a logo is not a brand. It’s just a symbol that we attach meaning to.

Google’s new logo became front page news, and such unveilings provide the opportunity for pundits on all sides to offer up their 2 cents on the design of the new logo. Often the mass media misreports a new logo as a new brand, but does a new logo really mean a new brand? It’s all too easy to forget how much it takes to build a brand, and it’s unfortunate that such debate serves to reinforce the view that a change of logo is all there is to it.

A logo is not a brand

A logo and a brand are two completely different things. Brands are complex and logos aren’t. A logo can be symbolic, representative of an idea or feeling, but it really can’t be that full of meaning. In fact, the best logos always tend to err on the side of simplicity. Just look at Target, Nike, Gap, Amazon, Apple. Simple, easy to understand, and utterly devoid of much meaning in and of themselves. Take the very first Apple logo, ornate, complex, more of a detailed illustration than a logo. Could you imagine Apple still having that logo nowadays?

Meaning takes time to attach to a logo. Back when it was first drawn up by Carolyn Davidson, the Nike Swoosh didn’t have the meaning we attach to it today, that’s a product of Nike’s advertising, marketing and extensive sponsorship over several decades.

Tip: Your logo is not your brand. It is a symbol that represents your brand.

Just because Google changed its logo, that doesn’t mean that the brand is new, rather they’ve created a new logo to better reflect that brand, it’s future aims, how it wants to be perceived. It’s been designed to exist in the digital realm, not sitting on our screens static, but rather to guide users around Google’s extensive number of products and come to life.

It’s a question of strategy

The strategic thinking that often culminates in a new logo or an entirely new visual identity is hardly ever disclosed or explored in much depth. All we see is a finished product and a brief summary of the rationale behind it. All too frequently there’s no summary. Usually just a sentence from a company brand manager or their CMO. This opens the floor for debate and criticism that could be completely unfounded.

The strategy is determined high up in boardrooms, and a part of that may include a rebrand or a new logo, but why would a company publish their brand strategy and offer that information on a silver platter for their competitors prying eyes? We should all be aware of this, and critical of change as we might be, the brand always changes their logo with good reason.

As Brand Union’s Toby Southgate said, ‘without strategic context, nothing else is objectively possible’. (link to design week post)

The arrival of Google’s new identity heralds its first dynamic logo. One which is made principally to exist in the digital realm, rather than remaining static as it would on a printed page. While this and their creation of Alphabet is clearly a big part of Google’s long term strategy, we only know what they want us to know.

Tip: It’s not enough to want a change for the sake of it, brands change identity as part of a larger long term strategy.

Branding needs consistent visual language to unify all the various facets of a company. A logo and assets are the foundation of a visual language, offering a way to differentiate one company from another.

But creating a brand is not purely down to visual language and branded assets like logos. It’s a far more holistic process to create a brand, one that requires time and consistency. As much as design is a process to solve a problem, branding is a process.

A brand is a tone of voice, how customer service is delivered, it’s intangible, yet we notice it. The world of branding is a blurry one, where business and creativity meet, and as much as designing the various visual facets has an effect on the feel of a company, consistent communications with customers is absolutely necessary when it comes to forming a brand that people form a relationship with. I covered this in my post on emotional branding. 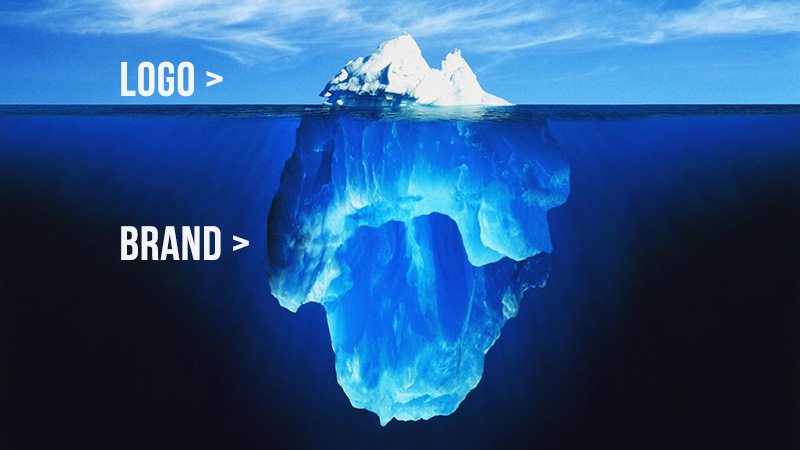 Tip: Logo’s are just the tip of the iceberg when it comes to brand building.

This is where inbound marketing comes in. It should be an essential part of helping to promote brands. People expect top brands to produce content, whether it’s informative or entertaining, and combines elements of visual language as well as helping to establish a brand tone.

When everyone can look at something new and publish their opinion immediately online, people will be quick to start judging the success or failure of a rebrand or new logo. But it will take time to work out if changing the branding has had a significant effect. Brands live out in the world, not in our Twitter feeds. We must reserve our judgement, and see how a new logo or identity stands up to the test of time.

A case in point would be the Airbnb logo. When the new logo launched, the wave of internet criticism was almost visible from space. As quickly as it began, the furore died. Too many new logos can be misrepresented, and incorrect judgement is usually forgotten before it can be proven wrong.

It seems that for the most part, the new Google identity has been well received. But you wouldn't expect anything less from a company that continues to innovate and surprise. But how can we help to clarify the distinction between a logo and a brand? An organised delivery helps.

Rebrand for a reason

So do you need to change your logo? I’d always be keen to point out that changing a logo without addressing your brand strategy is often a pointless exercise. If your company wants to change, wants to reposition itself, wants to appeal to a different kind of customer then your entire strategy should aim to do so.

As inbound marketing and web design go hand-in-hand, so should brand strategy and inbound strategy. Both help to establish a brand in the eye of a consumer. It’s about growing traffic, growing exposure and being seen as a company that offers value to consumers. A new logo on the same company really doesn't help change much if the brand doesn't strive to delight its customers.

What is emotional branding?

What is Graphic Design?

END_OF_DOCUMENT_TOKEN_TO_BE_REPLACED

SaaS Marketing? We've got you covered,  jump in and read our  Guide to Saas Marketing

Are you an enterprise marketing or sales leader? Dive into this Account Based Marketing Prospecting Guide

Learn more about B2B Chatbots in The Art of Conversational Marketing

Want to know how to drive better traffic to your finance website? Check out A Guide to Financial Services Lead Generation 2021

Read our fantastic eBook on improving your customer acquisition strategy? The Ultimate Guide to Buyer Personas

Are you trying to learn how to use conversational strategy works? Read Chatbots in Business

Struggling to figure out Linkedin? Read our Definitive Guide to Linkedin For Business

Listen to Our Products